Liberia is Africa’s first and oldest modern republic, having proclaimed its independence in 1848. In the 1980s, political tension erupted into the civil wars of 1989–97 and 1999–2003, resulting in the deaths of around 250,000 people and the displacement of more than a million others into refugee camps in neighbouring countries. Today Liberia is one of the world’s poorest countries, with a formal employment rate of just 15%.

Outbreaks of the Ebola virus in 2014–2016 resulted in over 10,000 cases and more than 4,750 deaths. Parents lost children, children were orphaned, brothers and sisters lost their siblings, communities were destroyed. The country was declared Ebola-free in September 2016. 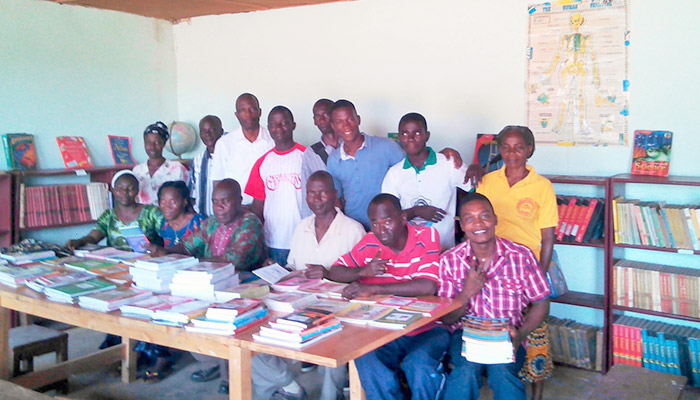 The town of Saclepea is in Nimba County, in northeastern Liberia, bordering Guinea and Cote d’Ivoire. During Liberia’s two civil wars, Saclepea was a primary recruiting and training centre for child soldiers, many of whom now live in the town, as re-integration back into their original communities is slow. The region was also badly hit by the Ebola crisis of 2014–2016. Around 51% of Liberian children under the age of 18 are orphans, while 40% of children under the age of 5 suffer from malnutrition.

The library for the Saclepea ULICA school was abandoned during the war years and remained neglected in the aftermath. Contributing factors such as the conflict, poor social and economic infrastructure, and the health status of the local community have led to general reading skills being very poor amongst students, their families and the general community.

The Mandala Trust was delighted to be asked to support the school, by renovating and re-equipping the library, providing core textbooks for the students, and funding an electrification project for the library and classrooms. The school has a population of around 200 students and the improved teaching environment should benefit the community for years to come.

To mark World Kindness Day on 13 November 2017, the Mandala Trust raised additional funds to enable the school’s sustainability through establishing a bakery and shop, where students can eat and socialise on site and buy basic provisions. A small building has been renovated and a traditional oven installed, and two local people have been trained as bakers.

In addition to the home-baked bread, the shop sells cooked rice and cold drinks, as well as the eggs, fruit and vegetables produced on the school site. There are also plans to sell stationery, and a range of crafts and solar-powered items.